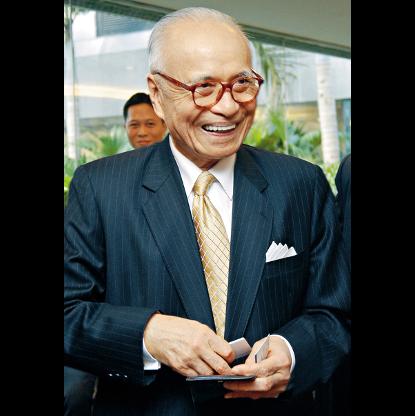 Chen Din Hwa was born on 1923 in Hong Kong. Chen Din Hwa came to Hong Kong from the mainland, started textile company in 1954 and transformed the privately held Nan Fung Group into a major property developer and shipping company. Diagnosed with Alzheimer's in 2009, a Hong Kong court declared him incapable of "managing and administering his properties. " A court-appointed committee tapped daughter Vivien to head Nan Fung, passing over her older sister Angela, a longtime U.S. resident. Chen's wife, Yang Foo Oi, is suing Vivien, accusing her daughter of exercising undue influence. Inspired by the teachings of Buddhism, the family's D.H. Chen Foundation has made substantial donations to help the needy through education, welfare and medicine.
Chen Din Hwa is a member of Real Estate

Chen was born in Ningbo, Zhejiang Province, Mainland China in 1923. His family was poor and he left school at the age of 12 to serve as an apprentice to a silk merchant. His Father was reportedly a Shanghai-based industrialist, mainly in textiles. When Chen was 22 years old, he was already chief manager of his family Business and owned several shops and factories in Shanghai and Ningbo. In 1949, Chen's family shifted to Hong Kong and set up in Business there. He set up a successful cotton-yarn maker called Nan Fung Mill.

When diagnosed with Alzheimer's disease in 2009, Chen handed over control of his Business to his younger daughter Vivien Chen, who had been part of the Business since 1981. In 2010, his wife Yang Foo Oi and elder daughter Angela, a trained Architect who lived in the United States and now in Hong Kong, sued younger daughter Vivian, alleging that Chen was misled into transferring assets to a trust fund controlled by Vivian. Yang divorced him in 2011.

Chen was married to Yang Foo Oi until 2011, when the couple divorced. The marriage produced two daughters. As a devout Buddhist, Chen founded the eponymous D.H. Chen Foundation, which provides charity services in education, welfare and Medicine.

Chen died on 17 June 2012 at the age of 89, reportedly of prostate cancer. At his death he was ranked by Forbes as the 14th wealthiest person in Hong Kong, with a net worth of US$2.6 billion, though earlier in his career he had been among the top ten.