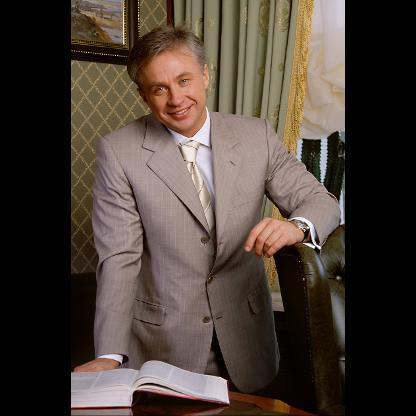 Yuriy Kosiuk was born on 1968 in Kiev, Ukraine, Ukraine. Yuriy Kosiuk heads MHP, the Ukraine's biggest producer of poultry. He studied food process engineering at Kiev Food Industry Institute. He got his start importing furniture and Turkmenistan gas. He then began trading grain after the Soviet Union's collapse and eventually moved into poultry. He took MHP, the precursor of which he founded in 1998 with 10 employees, public in 2008. Kosiuk pays himself handsomely through dividends and has used the cash to buy himself airplanes, a helicopter, a yacht and several cars including a Lamborghini.
Yuriy Kosiuk is a member of Food and Beverage

In 1985, he entered Kyiv Technological Institute of Food Industry. In 1992, Kosiuk graduated in meat and milk production process engineering from the Kiev Food Industry Institute under the specialty "Technology of meat and meat products". In 1989, as a 4-year student, he attended training for brokers.

In 1991, Yuriy Kosyuk became a broker at Kyiv Commodity Exchange. In the following year — one of the founders of JV "LKB". The company was engaged in import of metal, grain, gas. He invested his first earned $100 thousand in his own Business — a meat processing workshop in Cherkasy oblast. The company quickly went bankrupt, however, and had to be sold almost for nothing. It was Yuriy Kosyuk's first failure in Business. In 1995, he became the President of CJSC Scientific-Technical Business Centre for Food Industry. In 1998, he founded and headed CJSC Myronivsky Hliboproduct. In 2002, the trademark "Nasha Ryaba" entered the market.

The title of Hero of Ukraine with presentation of State order (20 August 2008) — for outstanding personal merits before the Ukrainian state in the development of agricultural sector, implementation of modern highly efficient technologies in the production and processing of agricultural products.

In 2009, he began the construction of a luxurious estate with a palace in the village of Khotiv, in the territory of Khotiv settlement of Scythian time. This and some other parts of the settlement had been previously taken out of the territory of a monument of archeology. The construction destroyed the northern part of the settlement (one of the richest in remnants of ancient buildings and surrounded by the highest part of the defensive rampart), as well as the surrounding landscape. According to Kosyuk himself, "what is built is built in the deep and has nothing to do with the settlement".

In my childhood, I wanted to become a soldier, later — the Director of the slaughterhouse. Most of the time he spends at work.