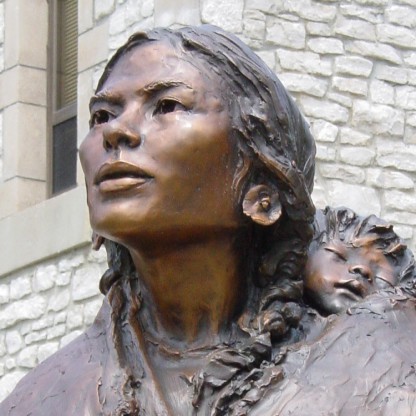 Sacagawea was born on 1788 in Salmon, United States, is Interpreter. Sacagawea, a woman born into a 'Shoshone' family in Idaho's Lemhi County, is still known for being the first Native American woman to have gone on an expedition. She accompanied a group of explorers on the first American quest, the 'Lewis and Clark Expedition', acting as their guide and interpreter. She stayed with the group for as long as the exploration lasted, being their means of communicating with 'Shoshone' tribes along the way. Having been abducted at the age of twelve by a group of 'Hidatsa' people, she went on to become an embodiment of the independence of women. Fiction has often suggested that she might have had a relationship with either Lewis or Clark, though the speculation is disputable. Despite the scarcity of historical records, numerous movies and books have attempted to touch upon this subject. She has been adopted as a role model by the 'National American Woman Suffrage Association'. Many sculptures have also been built in a bid to depict her, though there are still assumptions as to how she might have looked. In spite of her death more than two hundred years back, she is still considered a legendary hero by the citizens of America. Read on for more information on her life and works
Sacagawea is a member of Miscellaneous 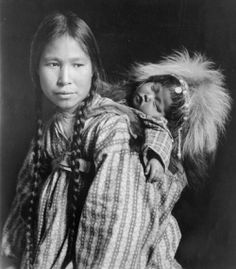 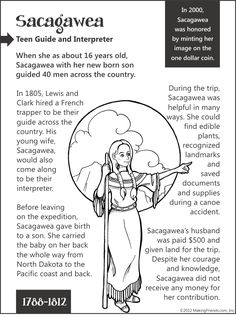 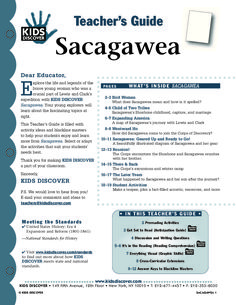 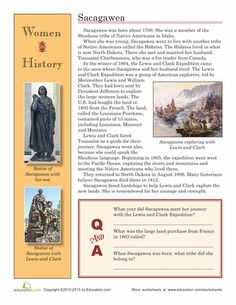 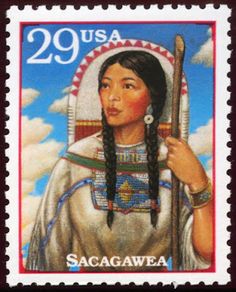 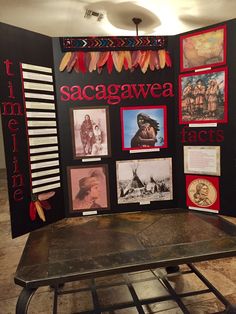 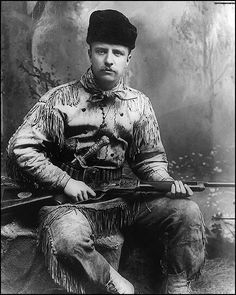 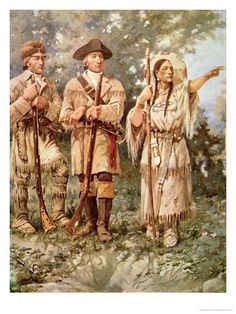 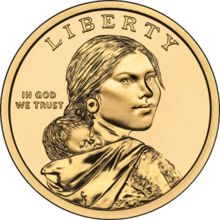 a french man by Name Chabonah, who Speaks the Big Belley language visit us, he wished to hire & informed us his 2 Squars (squaws) were Snake Indians, we engau (engaged) him to go on with us and take one of his wives to interpret the Snake language ...

Reliable historical information about Sacagawea is very limited. She was born into an Agaidika (Salmon Eater) of Lemhi Shoshone tribe between Kenney Creek and Agency Creek near Salmon, Idaho, in Lemhi County. In 1800, when she was approximately 12 years old, she and several other girls were kidnapped by a group of Hidatsa in a battle that resulted in the deaths of several Shoshone: four men, four women, and several boys. She was kept captive at a Hidatsa village near present-day Washburn, North Dakota.

Sacagawea was pregnant with her first child when the Corps of Discovery arrived near the Hidatsa villages to spend the winter of 1804–05. Captains Meriwether Lewis and William Clark built Fort Mandan. They interviewed several trappers who might be able to interpret or guide the expedition up the Missouri River in the springtime. They agreed to hire Charbonneau as an interpreter because they discovered his wife spoke Shoshone, and they knew they would need the help of Shoshone tribes at the headwaters of the Missouri.

Sakakawea /səˌkɑːkəˈwiːə/ is the next most widely adopted spelling, and the most often accepted among specialists. Proponents say the name comes from the Hidatsa language tsakáka wía, "bird woman". Charbonneau told expedition members that his wife's name meant "Bird Woman", and in May 1805 Lewis used the Hidatsa meaning in his journal:

On the return trip, they approached the Rocky Mountains in July 1806. On July 6, Clark recorded "The Indian woman informed me that she had been in this plain frequently and knew it well... She said we would discover a gap in the mountains in our direction..." (which is now Gibbons Pass). A week later, on July 13, Sacagawea advised Clark to cross into the Yellowstone River basin at what is now known as Bozeman Pass. Later, this was chosen as the optimal route for the Northern Pacific Railway to cross the continental divide.

After the expedition, Charbonneau and Sacagawea spent three years among the Hidatsa before accepting william Clark's invitation to settle in St. Louis, Missouri, in 1809. They entrusted Jean-Baptiste's education to Clark, who enrolled the young man in the Saint Louis Academy boarding school. Sacagawea gave birth to a daughter, Lizette, sometime after 1810.

Sacagawea gave birth to a daughter, Lizette Charbonneau, sometime after 1810. However, there is no later record of Lizette among Clark's papers. It is believed that she died in childhood.

Some American Indian oral traditions relate that rather than dying in 1812, Sacagawea left her husband Charbonneau, crossed the Great Plains, and married into a Comanche tribe. She was said to have returned to the Shoshone in Wyoming in 1860, where she died in 1884.

A few months later, 15 men were killed in an Indian attack on Fort Lisa, then located at the mouth of the Bighorn River. John Luttig and Sacagawea's young daughter were among the survivors. Toussaint Charbonneau was mistakenly thought to have been killed at this time, but he apparently lived to at least age 76. He had signed over formal custody of his son to William Clark in 1813.

The use of this spelling almost certainly originated from the use of the "j" spelling by Nicholas Biddle, who annotated the Lewis and Clark Expedition's journals for publication in 1814. This use became more widespread with the publication of the 1902 novel The Conquest: The True Story of Lewis and Clark, written by Eva Emery Dye. It is likely Dye used Biddle's secondary source for the spelling, and her highly popular book made it ubiquitous throughout the United States (previously most non-scholars had never even heard of Sacagawea).

The last recorded document citing Sacagawea's existence appears in william Clark's original notes written between 1825 and 1826. He lists the names of each of the expedition members and their last known whereabouts. For Sacagawea he writes: "Se car ja we au— Dead." (Jackson, 1962)."

After his infant son died, Jean-Baptiste came back from Europe in 1829 to live the life of a Western frontiersman. He became a gold miner and a hotel clerk and in 1846 led a group of Mormons to California. While in California he became a magistrate for the Mission San Luis Rey. He disliked the way Indians were treated in the Missions and left to become a hotel clerk in Auburn, California, once the center of gold rush activity.

After working six years in Auburn, the restless son of Sacagawea left in search of riches in the gold mines of Montana. He was 61 years old, and the trip was too much for him. He became ill with pneumonia and died in a remote area near Danner, Oregon, on May 16, 1866.

A long-running controversy has surrounded the correct spelling, pronunciation, and etymology of the woman's name; however, linguists working on Hidatsa since the 1870s have always considered the name's Hidatsa etymology essentially indisputable. The name is a compound of two Common Hidatsa nouns, cagáàga [tsakáàka] 'bird' and míà [míà] 'woman'. The compound is written as Cagáàgawia 'Bird Woman' in modern Hidatsa orthography, and pronounced [tsakáàkawia] (/m/ is pronounced [w] between vowels in Hidatsa). The double /aa/ in the name indicates a long vowel and the diacritics a falling pitch pattern. Hidatsa is a pitch-accent language that does not have stress; therefore, in the Hidatsa pronunciation all syllables in [tsaɡáàɡawia] are pronounced with roughly the same relative emphasis. However, most English speakers perceive the accented syllable (the long /aa/) as stressed. In faithful rendering of the name Cagáàgawia to other languages, it is advisable to emphasize the second, long syllable, not the last, as is Common in English.

According to these narratives, Porivo lived for some time at Fort Bridger in Wyoming with her sons Bazil and Baptiste, who each knew several languages, including English and French. Eventually, she found her way back to the Lemhi Shoshone at the Wind River Indian Reservation, where she was recorded as "Bazil's mother". This woman, Porivo is believed to have died on April 9, 1884.

Two early twentieth-century novels shaped much of the public perception of Sacagawea. The Conquest: The True Story of Lewis and Clark (1902), was written by American suffragist Eva Emery Dye and published in anticipation of the expedition's centennial. The National American Woman Suffrage Association embraced her as a female hero, and numerous stories and essays about her appeared in ladies' journals. A few decades later, Grace Raymond Hebard published Sacajawea: Guide and Interpreter of Lewis and Clark (1933) to even greater success.

Idaho native John Rees explored the "boat launcher" etymology in a long letter to the United States Commissioner of Indian Affairs written in the 1920s; it was republished in 1970 by the Lemhi County Historical Society as a pamphlet entitled "Madame Charbonneau" and contains many of the arguments in favor of the Shoshone derivation of the name.

In 1925, Dr. Charles Eastman, a Dakota Sioux physician, was hired by the Bureau of Indian Affairs to locate Sacagawea's remains. Eastman visited many different Native American tribes, to interview elderly individuals who might have known or heard of Sacagawea, and learned of a Shoshone woman at the Wind River Reservation with the Comanche name Porivo (chief woman). Some of the people he interviewed said that she spoke of a long journey wherein she had helped white men, and that she had a silver Jefferson peace medal of the type carried by the Lewis and Clark Expedition. He found a Comanche woman called Tacutine who said that Porivo was her grandmother. She had married into a Comanche tribe and had a number of children, including Tacutine's father Ticannaf. Porivo left the tribe after her husband Jerk-Meat was killed.

The belief that Sacagawea lived to old age and died in Wyoming was widely disseminated in the United States in the biography Sacajawea (1933) by University of Wyoming professor and Historian Grace Raymond Hebard. Critics have called into question Hebard's 30 years of research, which led to the biography of the Shoshone woman. Hebard presents a stout-hearted woman in her portrayal of Sacajawea that is "undeniably long on romance and short on hard evidence, suffering from a sentimentalization of Indian culture".

Some fictional accounts speculate that Sacagawea was romantically involved with Lewis or Clark during their expedition, however, while the journals show that she was friendly with Clark and would often do favors for him, the idea of a romantic liaison was created by novelists who wrote about the expedition much later. This fiction was perpetuated in the Western film The Far Horizons (1955).

It was Eastman's conclusion that Porivo was Sacagawea. In 1963, a monument to "Sacajawea of the Shoshonis" was erected at Fort Washakie on the Wind River reservation near Lander, Wyoming, on the basis of this claim.

In 1967, the Actress Victoria Vetri, under the name Angela Dorian, played Sacajawea in the episode "The Girl Who Walked the West" of the syndicated television series, Death Valley Days.

Posthumously, in 1977, she was inducted into the National Cowgirl Hall of Fame in Fort Worth, Texas. In 2001, she was given the title of Honorary Sergeant, Regular Army, by then President Bill Clinton.

Sacagawea has since become a popular figure in historical and young adult novels, including Anna Lee Waldo's novel Sacajawea (1984).

The name Sacajawea or Sacajewea /ˌsækədʒəˈwiːə/, in contrast to the Hidatsa etymology, is said to be derived from Shoshone Saca-tzaw-meah, meaning "boat puller" or "boat launcher". It is the preferred spelling used by the Lemhi Shoshone people, some of whom claim that her Hidatsa captors merely reinterpreted her existing Shoshone name in their own language, and pronounced it in their own dialect – they heard a name that approximated "tsakaka" and "wia", and interpreted it as "bird woman", substituting the hard "g/k" pronunciation for the softer "tz/j" sound that did not exist in the Hidatsa language.

When the corps reached the Pacific Ocean, all members of the expedition—including Sacagawea and Clark's black manservant York—voted on November 24 on the location for building their winter fort. In January, when a whale's carcass washed up onto the beach south of Fort Clatsop, Sacagawea insisted on her right to go see this "monstrous fish."