Hamdi Ulukaya was born on October 26, 1972 in Norwich, New York, Turkey, is Founder and CEO, Chobani. Yogurt Turkish immigrant popularized Greek yogurt in the U.S. Started in an old Kraft factory, his Chobani yogurt eventually took off, and today the company is raking in $1 billion in sales per year. Ulukaya gave away a tenth of Chobani's equity to his workers and is actively hiring refugees.
Hamdi Ulukaya is a member of Food and Beverage

Does Hamdi Ulukaya Dead or Alive?

As per our current Database, Hamdi Ulukaya is still alive (as per Wikipedia, Last update: May 10, 2020).

Currently, Hamdi Ulukaya is 48 years, 5 months and 16 days old. Hamdi Ulukaya will celebrate 49rd birthday on a Tuesday 26th of October 2021. Below we countdown to Hamdi Ulukaya upcoming birthday.

Hamdi Ulukaya’s zodiac sign is Scorpio. According to astrologers, Scorpio-born are passionate and assertive people. They are determined and decisive, and will research until they find out the truth. Scorpio is a great leader, always aware of the situation and also features prominently in resourcefulness. Scorpio is a Water sign and lives to experience and express emotions. Although emotions are very important for Scorpio, they manifest them differently than other water signs. In any case, you can be sure that the Scorpio will keep your secrets, whatever they may be.

Hamdi Ulukaya was born in the Year of the Rat. Those born under the Chinese Zodiac sign of the Rat are quick-witted, clever, charming, sharp and funny. They have excellent taste, are a good friend and are generous and loyal to others considered part of its pack. Motivated by money, can be greedy, is ever curious, seeks knowledge and welcomes challenges. Compatible with Dragon or Monkey.

Hamdi Ulukaya was born in 1972 to a Kurdish family in Turkey. His family owned and operated a sheep, goat, and dairy farm near the Euphrates River in İliç, Erzincan Province, where they made cheese and yogurt. The family often led a seasonally semi-nomadic existence tending and herding their flocks. Ulukaya is uncertain of his exact birth date because he was born during one of the family's mountain treks.

After studying political science at Ankara University, in 1994 Ulukaya moved to the United States to study English at Adelphi University on Long Island, New York. In 1997 he moved upstate and transferred to the University at Albany, State University of New York where he enrolled in a few Business courses.

He ended up taking a job on an upstate farm. During a visit, his Father persuaded Ulukaya to import the family's feta cheese from Turkey, after tasting the inferior cheese available locally. When the imported cheese proved popular, Ulukaya opened a small wholesale feta cheese plant of his own, called Euphrates, in Johnstown, New York in 2002. The venture was modestly successful but by the two-year mark it had just barely broken even. Ulukaya later recalled, "It was two years of the most challenging days of my life."

In the spring of 2005, Ulukaya noticed a piece of Jun K mail advertising a fully equipped yogurt factory for sale in South Edmeston, New York, 65 miles (105 km) west of his feta cheese factory. The 84-year-old factory had been closed by Kraft Foods. Although he initially threw the flier away, Ulukaya toured the plant the following day and decided to buy it, against the advice of his attorney and Business advisor. Ulukaya financed the purchase within five months with a loan from the Small Business Administration, plus local business-incentive grants. He initially named his new company Agro Farma, and hired a handful of the former Kraft employees. As a first task they painted and repaired the neglected factory.

In October 2007, he shipped his first order of Chobani, a few hundred cases, to a grocer on Long Island. The store repeated the order the following week.

After BJ's and Costco began carrying Chobani in 2009, the company doubled its sales every year through 2013. With an eye on Australian and Asian markets, in 2011 Ulukaya acquired Melbourne dairy Producer Bead Foods, and began Manufacturing and selling Chobani in Australia. In mid 2012, he initiated a $88.5 million expansion for the company, acquiring 100 acres next to its upstate New York facility and building an 80,000-square-foot addition. The expansion was partially funded by $1.5 million in New York State grants for economic development.

From establishing Chobani, Ulukaya has given 10% of his company's net profits to charitable causes, and to individuals and organizations working toward positive long-lasting change. In 2010 he established the company's charitable arm, the Chobani Shepherd's Gift Foundation, now called the Chobani Foundation, to manage this philanthropy. Donations have included major grants to support famine relief efforts in Somalia, and to underwrite the New York City Pianos project launched by Sing for Hope.

Strained, or "Greek" yogurt as it is called in the U.S., is much thicker, creamier, and tangier, with a higher protein content, as the whey is strained out. To manufacture strained yogurt, Ulukaya needed a million-dollar commercial machine called a milk separator, which the American-style Kraft factory did not have. He found a used one in Wisconsin and negotiated to buy it for $50,000. On his trip to pick up the separator, the name "Chobani" – a variation on çoban, the Turkish word for shepherd – popped into his head.

Ulukaya has been noted both for his entrepreneurial skills and also his commitment to making affordable and nutritious foods using only natural ingredients. In addition to receiving awards for entrepreneurship, in April 2014 he was named by President Barack Obama as an inaugural member of the Presidential Ambassadors for Global Entrepreneurship (PAGE) initiative – 11 selected Business Leaders who will encourage entrepreneurship in the U.S. and abroad. Also in 2014, the Culinary Institute of America honored him with its Leadership Award (Augie Award) in the Health and Wellness category.

In November 2015, Ulukaya was honored by the Children's Aid Society with their Corporate Leadership Award. He was honored in recognition of his passion and his commitment to lasting change in the lives of those in need around the world.

Ulukaya was featured by CBSNews' 60 Minutes on April 9, 2017 in a segment called "Chief of Chobani" that focused on his approach to Business and philanthropy. 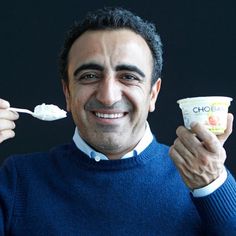 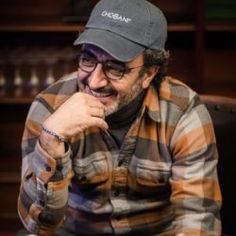 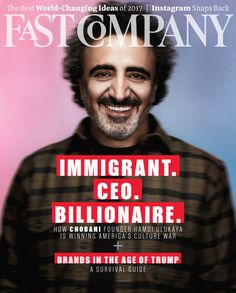 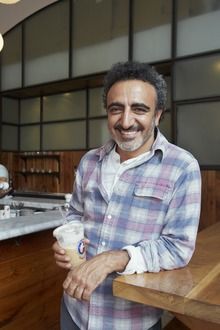