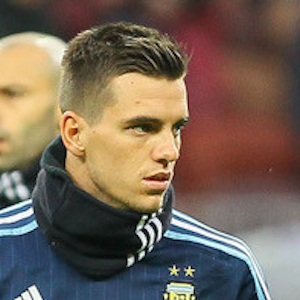 As per our current Database, Giovani Lo Celso is still alive (as per Wikipedia, Last update: May 10, 2020).

Giovani Lo Celso’s zodiac sign is Aries. According to astrologers, the presence of Aries always marks the beginning of something energetic and turbulent. They are continuously looking for dynamic, speed and competition, always being the first in everything - from work to social gatherings. Thanks to its ruling planet Mars and the fact it belongs to the element of Fire (just like Leo and Sagittarius), Aries is one of the most active zodiac signs. It is in their nature to take action, sometimes before they think about it well.

Giovani Lo Celso was born in the Year of the Rat. Those born under the Chinese Zodiac sign of the Rat are quick-witted, clever, charming, sharp and funny. They have excellent taste, are a good friend and are generous and loyal to others considered part of its pack. Motivated by money, can be greedy, is ever curious, seeks knowledge and welcomes challenges. Compatible with Dragon or Monkey.

Professional soccer player who is best recognized for having played the attacking midfield position for Paris Saint-Germain Football Club of the Ligue 1. His popularity led to him amassing more than 650,000 followers on his Instagram account.

He made his league debut with Rosario Central in 2015.

During the 2016-2017 season he made a total of 5 appearances with Paris Saint-Germain.

He is the son of Juan Pere Lo Celso. He has two siblings.

Both he and Thiago Silva played for Paris Saint-Germain.