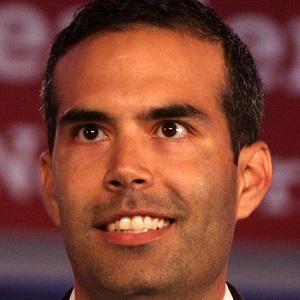 George P. Bush’s zodiac sign is Taurus. According to astrologers, Taurus is practical and well-grounded, the sign harvests the fruits of labor. They feel the need to always be surrounded by love and beauty, turned to the material world, hedonism, and physical pleasures. People born with their Sun in Taurus are sensual and tactile, considering touch and taste the most important of all senses. Stable and conservative, this is one of the most reliable signs of the zodiac, ready to endure and stick to their choices until they reach the point of personal satisfaction.

George P. Bush was born in the Year of the Dragon. A powerful sign, those born under the Chinese Zodiac sign of the Dragon are energetic and warm-hearted, charismatic, lucky at love and egotistic. They’re natural born leaders, good at giving orders and doing what’s necessary to remain on top. Compatible with Monkey and Rat.

Politician most famous as a member of the Bush political family. He co-founded the private equity firm Pennybacker Capital, LLC and ran for Texas Land Commissioner in 2014.

He spoke at the 1988 Republican National Convention at age twelve.

In 2000, he was featured on People Magazine's list of the 100 Most Eligible Bachelors.

He married Amanda Williams, who he attended law school with, in 2004. They had sons named John and Prescott.