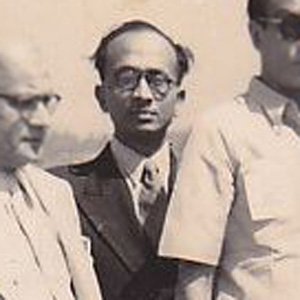 Diptendu Pramanick was born on July 18, 1910 in India. Founder and Secretary of the Eastern India Motion Pictures Association who helped extend the influence of Bengali cinema.
Diptendu Pramanick is a member of Entrepreneur

Diptendu Pramanick’s zodiac sign is Cancer. According to astrologers, the sign of Cancer belongs to the element of Water, just like Scorpio and Pisces. Guided by emotion and their heart, they could have a hard time blending into the world around them. Being ruled by the Moon, phases of the lunar cycle deepen their internal mysteries and create fleeting emotional patterns that are beyond their control. As children, they don't have enough coping and defensive mechanisms for the outer world, and have to be approached with care and understanding, for that is what they give in return.

Diptendu Pramanick was born in the Year of the Dog. Those born under the Chinese Zodiac sign of the Dog are loyal, faithful, honest, distrustful, often guilty of telling white lies, temperamental, prone to mood swings, dogmatic, and sensitive. Dogs excel in business but have trouble finding mates. Compatible with Tiger or Horse.

Founder and Secretary of the Eastern India Motion Pictures Association who helped extend the influence of Bengali cinema.

He was the Secretary to the then-Mayor of Calcutta Sri Santosh Kumar Basu.

His legacy lived on through the Diptendu Pramanick Book Fund. Every year children from the Bardhaman district would receive schoolbooks from this fund.

He helped to organize the First International Film Festival of India in 1952, which was attended by world-famous American Director Frank Capra.