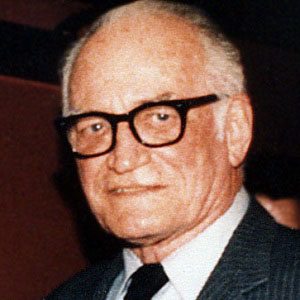 As per our current Database, Barry Goldwater Jr. is still alive (as per Wikipedia, Last update: May 10, 2020).

Barry Goldwater Jr.’s zodiac sign is Cancer. According to astrologers, the sign of Cancer belongs to the element of Water, just like Scorpio and Pisces. Guided by emotion and their heart, they could have a hard time blending into the world around them. Being ruled by the Moon, phases of the lunar cycle deepen their internal mysteries and create fleeting emotional patterns that are beyond their control. As children, they don't have enough coping and defensive mechanisms for the outer world, and have to be approached with care and understanding, for that is what they give in return.

Barry Goldwater Jr. was born in the Year of the Tiger. Those born under the Chinese Zodiac sign of the Tiger are authoritative, self-possessed, have strong leadership qualities, are charming, ambitious, courageous, warm-hearted, highly seductive, moody, intense, and they’re ready to pounce at any time. Compatible with Horse or Dog.

Notable as the son of U.S. Senator and 1964 Republican presidential nominee Barry Goldwater, he also had a successful political career, serving California's 20th and 27th districts in the United States House of Representatives during the 1970s and early 1980s.

After completing his high school education at Virginia's Staunton Military Academy, he briefly studied at the University of Colorado before ultimately graduating from Arizona State University. Before entering politics, he pursued careers in the business and financial sectors.

While serving in Congress, he was one of the authors of the famous Privacy Act of 1974.

Born in Scottsdale, Arizona, to Barry Goldwater and Margaret Johnson, he grew up with an older sister named Joanne and younger siblings named Michael and Peggy.

He endorsed the 1980 presidential campaign of his longtime friend and fellow Republican Ronald Reagan.