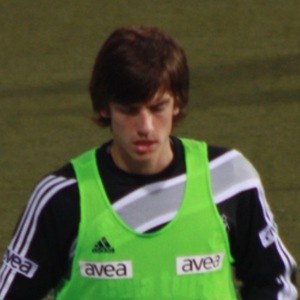 As per our current Database, Atinc Nukan is still alive (as per Wikipedia, Last update: May 10, 2020).

Atinc Nukan’s zodiac sign is Cancer. According to astrologers, the sign of Cancer belongs to the element of Water, just like Scorpio and Pisces. Guided by emotion and their heart, they could have a hard time blending into the world around them. Being ruled by the Moon, phases of the lunar cycle deepen their internal mysteries and create fleeting emotional patterns that are beyond their control. As children, they don't have enough coping and defensive mechanisms for the outer world, and have to be approached with care and understanding, for that is what they give in return.

Atinc Nukan was born in the Year of the Rooster. Those born under the Chinese Zodiac sign of the Rooster are practical, resourceful, observant, analytical, straightforward, trusting, honest, perfectionists, neat and conservative. Compatible with Ox or Snake.

Professional football player known for being a centre-back for the German football club RB Leipzig. He is also known for his work as a defender on Turkey's national team.

His youth career started in 2004 when he began playing for the Küçükçekmecespor club. In 2006, he began playing with Besiktas, and in 2010 made his professional debut with the club. He then joined RB Leipzig in 2015. That same year he also debuted with the Turkey national team.

He is known for having won the Super Lig during his 2016-17 season and the Turkiye Kupasi during his 2010 season, both with the Besiktas club.

He was born and raised in Fatih, Istanbul, Turkey.

He played along side Hasan Ali Kaldırım as part of Turkey's 2018 national team.