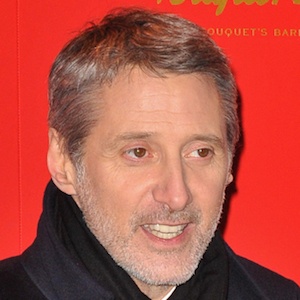 As per our current Database, Antoine de Caunes is still alive (as per Wikipedia, Last update: May 10, 2020).

Antoine de Caunes’s zodiac sign is Sagittarius. According to astrologers, Sagittarius is curious and energetic, it is one of the biggest travelers among all zodiac signs. Their open mind and philosophical view motivates them to wander around the world in search of the meaning of life. Sagittarius is extrovert, optimistic and enthusiastic, and likes changes. Sagittarius-born are able to transform their thoughts into concrete actions and they will do anything to achieve their goals.

Antoine de Caunes was born in the Year of the Snake. Those born under the Chinese Zodiac sign of the Snake are seductive, gregarious, introverted, generous, charming, good with money, analytical, insecure, jealous, slightly dangerous, smart, they rely on gut feelings, are hard-working and intelligent. Compatible with Rooster or Ox.

French actor, writer and film director who is known for his movies Yann Piat: Chronicle Of An Assassination, Love Bites, and Coluche: The Story Of A Guy.

He is considered the first French famous baby, because his parents were so well-known. He began his career under the pseudonym Paul Persavon, writing theme songs for cartoon shows on the TV station France 2.

His parents are prominent journalist Georges de Caunes and TV announcer Jacqueline Joubert. He married journalist Daphné Roulier in 2007. They have on son together, Jules de Caunes. He has two children from previous relationships, Emma De Caunes and Louis De Caunes.