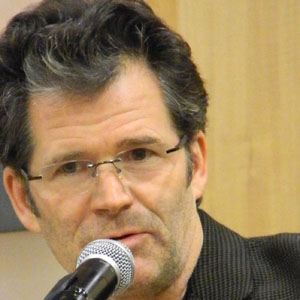 As per our current Database, Andre Dubus III is still alive (as per Wikipedia, Last update: May 10, 2020).

Andre Dubus III’s zodiac sign is Virgo. According to astrologers, Virgos are always paying attention to the smallest details and their deep sense of humanity makes them one of the most careful signs of the zodiac. Their methodical approach to life ensures that nothing is left to chance, and although they are often tender, their heart might be closed for the outer world. This is a sign often misunderstood, not because they lack the ability to express, but because they won’t accept their feelings as valid, true, or even relevant when opposed to reason. The symbolism behind the name speaks well of their nature, born with a feeling they are experiencing everything for the first time.

Andre Dubus III was born in the Year of the Pig. Those born under the Chinese Zodiac sign of the Pig are extremely nice, good-mannered and tasteful. They’re perfectionists who enjoy finer things but are not perceived as snobs. They enjoy helping others and are good companions until someone close crosses them, then look out! They’re intelligent, always seeking more knowledge, and exclusive. Compatible with Rabbit or Goat.

An American fiction writer, he is best known for his 1999 novel, House of Sand and Fog, which was adapted into an Academy Award-nominated film. His other works include The Garden of Last Days (2008) and Dirty Love (2013).

He studied sociology at the University of Texas, Austin. He began writing in his early twenties, and he published his debut short story, Forky, in 1982.

He published his memoir, Townie, in 2011. The work details his impoverished childhood in Massachusetts.

He had three children with his wife, Fontaine Dollas Dubus. He and his three siblings were the children of author Andre Dubus.

His popular novel, House of Sand and Fog, was made into a film starring Jennifer Connelly.