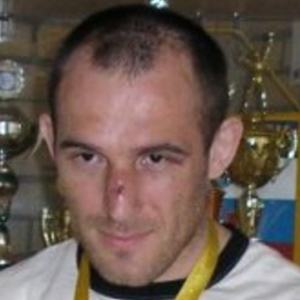 Alexey Oleynik was born on June 25, 1977 in Kharkiv, Ukraine. Professional MMA fighter who is known for specializing in jujitsuka, combat sambist, and grappler. He is known for being signed to the Ultimate Fighting Championship where he competes in the heavyweight division. His signature move is the Ezekiel choke.
Alexey Oleynik is a member of MMA Fighter

Does Alexey Oleynik Dead or Alive?

As per our current Database, Alexey Oleynik is still alive (as per Wikipedia, Last update: May 10, 2020).

Alexey Oleynik’s zodiac sign is Cancer. According to astrologers, the sign of Cancer belongs to the element of Water, just like Scorpio and Pisces. Guided by emotion and their heart, they could have a hard time blending into the world around them. Being ruled by the Moon, phases of the lunar cycle deepen their internal mysteries and create fleeting emotional patterns that are beyond their control. As children, they don't have enough coping and defensive mechanisms for the outer world, and have to be approached with care and understanding, for that is what they give in return.

Alexey Oleynik was born in the Year of the Snake. Those born under the Chinese Zodiac sign of the Snake are seductive, gregarious, introverted, generous, charming, good with money, analytical, insecure, jealous, slightly dangerous, smart, they rely on gut feelings, are hard-working and intelligent. Compatible with Rooster or Ox.

Professional MMA fighter who is known for specializing in jujitsuka, combat sambist, and grappler. He is known for being signed to the Ultimate Fighting Championship where he competes in the heavyweight division. His signature move is the Ezekiel choke.

He first began representing Russia on the Imperial Team in the M-1 Challenge in 2009. Shortly after, in 2011, he went on to train with K-Dojo Warrior Tribe where he participated in two grappling tournaments. In 2013, he signed a contract with the UFC and had his debut fight in June of 2014.

He is known for being the first fighter in UFC history to finish with an Ezekiel Choke. He was also awarded the WCMMA Heavyweight Championship in the World Cup of Mixed Martial Arts.

He was born and raised in the Ukrainian SSR in the Soviet Union. He is married with five children.

He has defeated several MMA fighters throughout his career including Travis Browne, Anthony Hamilton, and Jeff Monson.