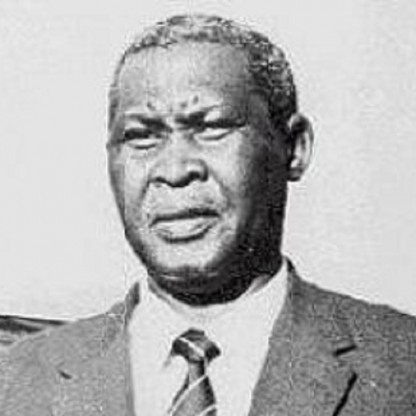 Albert John Luthuli was born on 1898 in Bulawayo, Southern Rhodesia, South African, is President of African National Congress (ANC). Albert John Luthuli was a leader of black resistance in South Africa. He took up nonviolent methods to end the regressive system of apartheid and while doing so helped to form world opinion against South Africa's policy of Apartheid. Born towards the end of the nineteenth century into the Zulu tribe, he began his career as a teacher, but later gave it up to become the tribal chief on the invitation of the tribal elders. Thereafter, he concentrated on improving the life of his brethren. But as the minority white government began to use brutal force to suppress the aspiration of the black population, he became involved with national politics and subsequently became the president of African National Congress. For most of his life he lived under bans, yet he continued to inspire his people through written speeches and statements. In 1960, he became the first African to receive Nobel Peace Prize for his nonviolent struggle against apartheid.
Albert John Luthuli is a member of Political Leaders 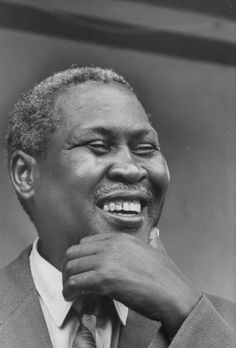 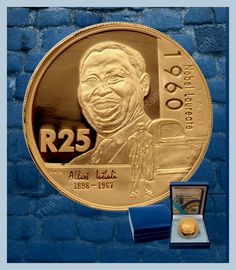 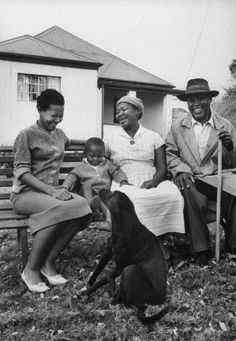 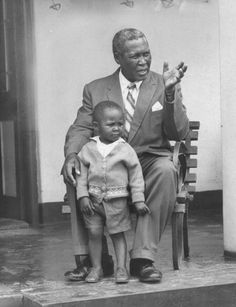 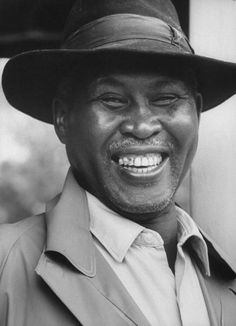 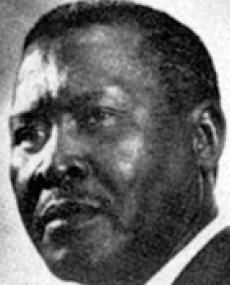 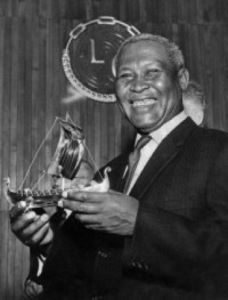 Albert John Mvumbi Luthuli was born in Solusi Mission Station near Bulawayo, in southern Rhodesia, now Zimbabwe. While his date of birth remains unknown, he later calculated his year of birth to be 1898.His father, John Bunyan Lutuli, was the younger son of a tribal chief at Groutville in the Umvoti Mission Reserve near Stanger, Natal. He became a Christian missionary at the Seventh-Day Adventist Church and at the time of Albert’s birth, was working as an interpreter among the Matabele of Rhodesia. His mother, Mtonya Gumede, spent part of her childhood in the household of Cetewayo kaMpande, the king of the Zulu Kingdom, but was mostly raised in Groutville. Albert was the couple’s third child. Since no information is available about his siblings, it is assumed he was the only surviving child. Albert lost his father at the age of eight. Sometime between 1906 and 1908, he accompanied his mother to his ancestral home in Groutville. There he lived in the household of his uncle, Martin Lutuli, who had succeeded his grandfather as the tribal chief. In 1911, supported by his mother, who now worked as a washerwoman, Albert entered the local Congregationalist mission school. Here he studied until standard four. Living with his uncle, he also imbibed tribal traditions and values. In 1914, Albert was shifted to Ohlange Institute. It was a boarding school, run by Dr. John Dube, the founding President of the South African Native National Council and here he studied for two terms. On passing the year-end examination at Ohlange Institute, Albert was transferred to a Methodist institution at Edendale, located in the KwaZulu-Natal province to undergo a teachers' training course. He graduated from there in 1917. The third son of Seventh-day Adventist missionary John Bunyan Lutuli and Mtonya Gumede, Albert Lutuli was born near Bulawayo in what was then called Rhodesia (present day Zimbabwe), around 1898. His father died, and he and his mother returned to her ancestral home of Groutville in KwaDukuza (Stanger), Natal, South Africa. He stayed with his uncle, Martin Lutuli, who was at that time the elected chief of the Zulu Christians inhabiting the mission reserve area now covered by the Umzinyathi District Municipality. Lutuli attended the Adams College south of Durban.

On completing a teaching course at Edendale, near Pietermaritzburg, Lutuli accepted the post of principal and only Teacher at a primary school in rural Blaauwbosch, Newcastle, Natal. Here Lutuli was confirmed in the Congregational Church and became a lay preacher. In 1920 he received a government bursary to attend a higher teachers' training course at Adams College, and subsequently joined the training college staff, teaching alongside Z. K. Mathews, who was then head of the Adams College High School. To provide financial support for his mother, he declined a scholarship to University of Fort Hare.

In 1927 he married Nokukhanya Bhengu, the granddaughter of the Zulu chief, Dhlokolo of the Ngcolosi. Seven children were born to the couple.Luthuli spent his last years in enforced isolation while African National Congress abandoned the policy of nonviolence. He also suffered from high blood pressure, once having a slight stroke. As he grew older, his hearing and eyesight also became impaired.

In 1928 he became secretary of the African Teacher's Association and in 1933 its President. He was also active in missionary work.

In 1933 the tribal elders asked Lutuli to become chief of the Zulu tribe in succession to his uncle. For two years he hesitated, but accepted the call in early 1936 and became a chieftain. He held this position until he was removed from his office by the Apartheid government in 1953. Their having done so notwithstanding, amongst his people he retained the use of the dignity "chief" as a pre-nominal style for the remainder of his life.

In 1936 the government disenfranchised the only black Africans who had voting rights at that time — those in Cape Province. In 1948 the Nationalist Party, which was in control of the government, adopted the policy of apartheid (apartness) and over the next decade the Pass Laws were tightened.

Prior to Luthuli's involvement with the African National Congress (ANC) Luthuli also had served on the executive committee of the Christian Council of South Africa. Luthuli was one of its delegates to an International Missionary Conference held in Madras, India, in 1938.

In 1944 Lutuli joined the African National Congress (ANC). In 1945 he was elected to the Committee of the KwaZulu Provincial Division of ANC and in 1951 to the presidency of the Division. The next year he joined with other ANC Leaders in organizing nonviolent campaigns to defy discriminatory laws.

Lutuli's leadership of the ANC covered the period of violent disputes between the party's "Africanist" and "Charterist" wings. Africanist critics claim Lutuli was peripherialized in Natal and the Transvaal ANC Provincial branch and its Communist Party (CPSA officially dissolved 1950 but secretly reconstituted 1953 as SACP) allies took advantage of this situation. Lutuli did not see the Freedom Charter before it was adopted by acclaim at Kliptown in 1955. After reading the document and realising the ANC, despite its numerical superiority, had been subordinated to one vote in a five-member multiracial and trade union "Congress Alliance", Lutuli rejected the Charter but then later accepted it partly to counter the more radical Africanist wing whom he likened to black nazis. In 1959 the Africanists split from the ANC over the issue of the Freedom Charter and Oliver Tambo's 1958 rewriting of the ANC Constitution, founding the Pan Africanist Congress (PAC). The PAC posed a serious challenge to the ANC until its military wing was destroyed at Itumbi camp, Chunya, Tanzania in March 1980.

A month later Lutuli was elected president-general of ANC, formally nominated by the Future Pan Africanist Congress leader Potlako Leballo. Responding immediately, the government imposed two two-year bans on Lutuli's movement. When the second ban expired in 1956, he attended an ANC conference only to be arrested and charged with treason a few months later, along with 155 others. In December 1957, after nearly a year in custody during the preliminary hearings, Lutuli was released and the charges against him and sixty-four of his compatriots were dropped.

He stood close to the International Fellowship of Reconciliation that in 1957 opened a branch in Southern Rhodesia (now known as Zimbabwe.)

Another five-year ban confined him to a 15-mile (24 km) radius of his home. The ban was temporarily lifted while he testified at the continuing treason trials. It was lifted again in March 1960, to permit his arrest for publicly burning his pass following the Sharpeville massacre. In the ensuing state of emergency he was arrested, found guilty, fined, given a suspended jail sentence, and finally returned to Groutville. One final time the ban was lifted, this time for 10 days in early December 1961, to permit Lutuli and his wife to attend the Nobel Peace Prize ceremonies in Oslo, an award described by Die Transvaler as "an inexplicable pathological phenomenon".

In December 1961, without Lutuli's sanction, Nelson Mandela of the Provincial ANC publicly launched Umkhonto we Sizwe at the All In Conference, where delegates from several movements had convened to discuss cooperation. Mandela's charisma and the global publicity surrounding his trial and imprisonment upstaged Lutuli, who grew increasingly despondent in isolation. (In Mandela's autobiography, he claims that Lutuli was consulted and consented before the formation of Umkhonto we Sizwe.)

In 1962 he published an autobiography entitled Let My People Go.

A fourth ban, to run for five years confining Lutuli to the immediate vicinity of his home, was issued in May 1964, to run concurrently with the third ban.

In 1966, he was visited by United States Senator Robert F. Kennedy, who was visiting South Africa at the time. The two discussed the ANC's struggle. Senator Kennedy's visit to the country, and his meeting with Lutuli in particular, caused an increase of world awareness of the plight of black South Africans.

Lutuli is honoured with a feast day on the liturgical calendar of the Episcopal Church (USA) on 21 July, the day of his death in 1967.